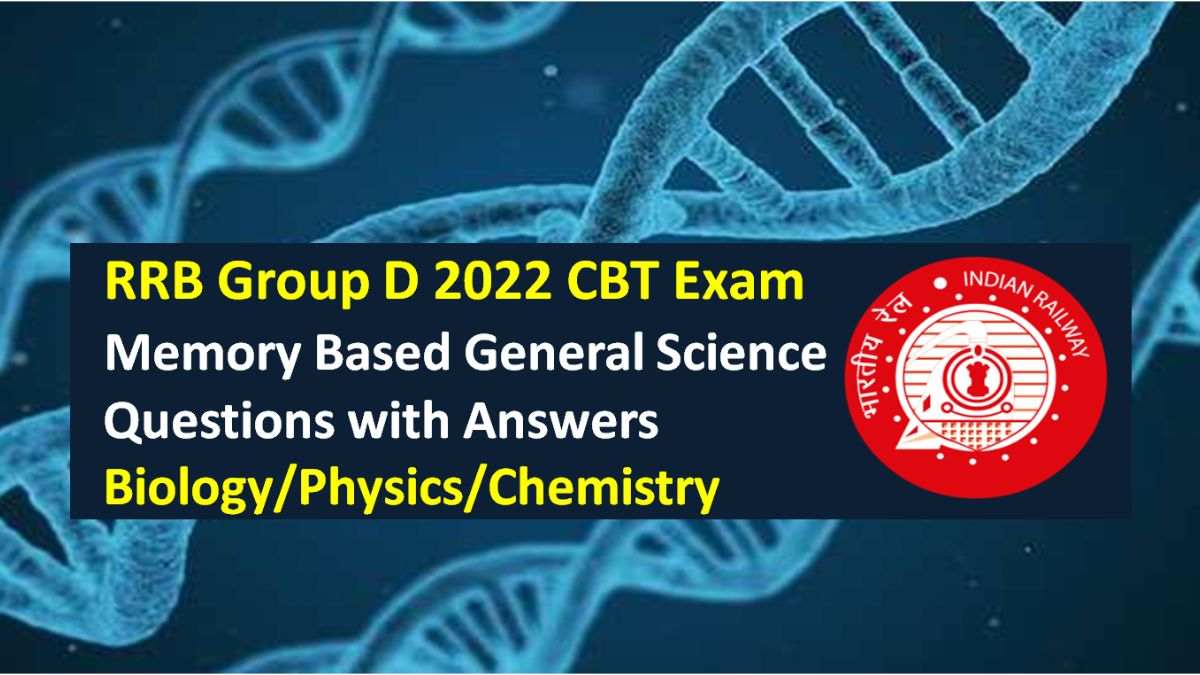 RRB Group D 2022 Exam Memory Based General Science Questions (PDF Download): RRB Group D 2022 CBT Phase-2 Exam has been commenced and is being held in different phases for the recruitment of 103769 Vacancies under Level 1 of the 7th CPC Pay Matrix in various units of Indian Railways. In this article, we are going to share the important memory-based General Science – Chemistry, Physics and Biology Questions as per the feedback received by the candidates who have appeared for RRB Group D 2022 CBT Exam. The General Science section is of 25 marks out of total 100 marks. Candidates are advised to definitely cover these questions for scoring high marks in the Exam.

Let’s have a look at the Important Questions that are being covered in the RRB Group D 2022 General Science Section:

Answer: In physics, a force is an influence that can change the motion of an object. A force can cause an object with mass to change its velocity, i.e., to accelerate. Force can also be described intuitively as a push or a pull. A force has both magnitude and direction, making it a vector quantity.

Answer: Photosynthesis is the process by which plants use sunlight, water, and carbon dioxide to create oxygen and energy in the form of sugar.

Answer: When the concave mirror is placed very close to the object, a virtual and magnified image is obtained and if we increase the distance between the object and the mirror, the size of the image reduces and real images are formed.

Diabetes is caused by the deficiency of:

Answer: Diabetes is caused due to the deficiency of insulin in the blood

Newland octave law was active till:

How many covalent bonds in N2 molecule?

Which of the gland is not endocrine gland?

During photosynthesis, plant releases which gas in the night?

Answer:  At night, the plants uptake oxygen and release carbon dioxide, which is called respiration.

How does compost is form?

What happens when CaCO3 reacts with H2SO4?

Resistance = 0.2 ohm, length 4m and area of cross section 8m2 If length is doubled and area is increased 4 times, then the resistance will be?

In Concave lens, the height of object is 25 cm, focal length 10 cm, object distance is 20 cm. What will be the height of the image?

If Radius of curvature is 26cm, then focus distance will be:

Which color has minimum deflection in Prism?

Answer:  Red colour will deviates the least because it has highest wavelength among the seven lights

Answer: Valency is defined as the number of hydrogen atoms which combine directly or indirectly with one atom of an element. Example: One atom of nitrogen combines with three atoms of hydrogen to form ammonia gas. So, the valency of nitrogen is 3.

Answer: Biotin, also known as vitamin H or B7, is a water-soluble vitamin that helps the body metabolize fats, carbohydrates, and protein.

What is Ohm’s law?

Answer: Ohm’s law states that the voltage across a conductor is directly proportional to the current flowing through it, provided all physical conditions and temperatures remain constant. In the equation, the constant of proportionality, R, is called Resistance and has units of ohms, with the symbol Ω.

Answer: Vitamin D (also referred to as “calciferol”) is a group of fat-soluble secosteroids responsible for increasing intestinal absorption of calcium, magnesium, and phosphate, and many other biological effects.

Which hormone is secreted by thyroid gland?