Tina Dabi Mark Sheet: Tina Dabi is UPSC IAS Topper for the 2015 Batch. She was born on 09 November 1993 in Bhopal, Madhya Pradesh. She is currently posted at Jaisalmer in Rajasthan. Tina Dabi’s 12th Marksheet has gone viral these days. You can check the details here.

Tina Dabi 12th Mark Sheet 2022: Tina Dabi is now one of the celebrated personalities of the country. She has 1.6 million followers on her Instagram account. These days her 12th class mark sheet is going viral on social media. People are wondering about her mark sheet.. Here, we will tell you why her marksheet is in the trend.

Tina Dabi done her schooling at Jesus and Mary School in Delhi. According to the reports, Tine Sabi scored full marks in political science and was a topper on her boards. She has done her senior secondary from CBSE, reports claims. However, there is no proof that the viral marksheet is correct. Even though, Tina Dabi has not confirmed the same.

After completing her schooling, she pursued her graduation from Lady Shri Ram College, Delhi University. Since then she started preparing for her civil services exam. 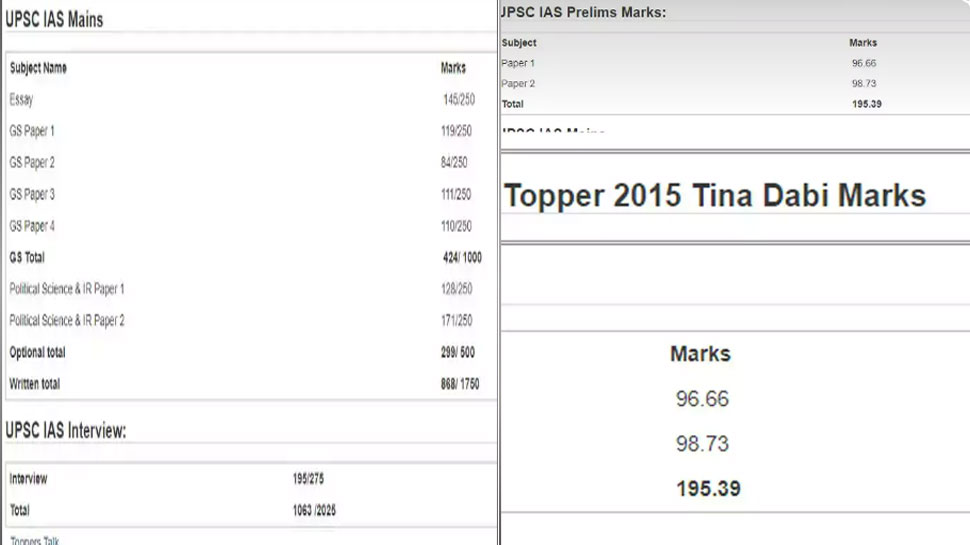 This marksheet is also viral on social media channels. You can see above. No authenticity is for this marksheet as well.

Who is Tina Dabi ?

Tina Dabi is UPSC IAS Topper for the 2015 Batch. She was born on 09 November 1993 in Bhopal, Madhya Pradesh. She is currently posted at Jaisalmer in Rajasthan.

On 07 April 20218, IAS Officer Tina Dabi married her batchmate IAS Athar Aamir Khan but this marriage did not last long.

She recently got married to IAS Pradeep Gawande.